For over 20 years, Arizona’s public schools have been under siege. Organized opposition has slashed education budgets and undermined public schools.

In Part 1 and Part 2 of our 8-part deep dive into privatization, we explored how school choice groups resurrected vouchers from the dead in AZ.

Many people have asked us — how has our classroom crisis gotten this bad? How have we gotten to the point where $200 million is diverted from public to private schools every single year in Arizona?

In this installment, we dig into the nation’s very first voucher program — School Tuition Organizations, or STO vouchers — passed right here in Arizona.

In 1997, then-Governor Fife Symington signed into law a private tax credit law that would set the stage as Arizona’s first form of vouchers. At the time, the Joint Legislative Budget Committee (JLBC) estimated that the cost would be $4.5M per year. In 2019, the cost now tops $160 million per year, and 93% of these vouchers are used for religious schools.1

The STO program has grown by almost 4000% in 20 years. Arizona legislators have strategically and repeatedly expanded it, while several have personally profited from the organizations themselves.2 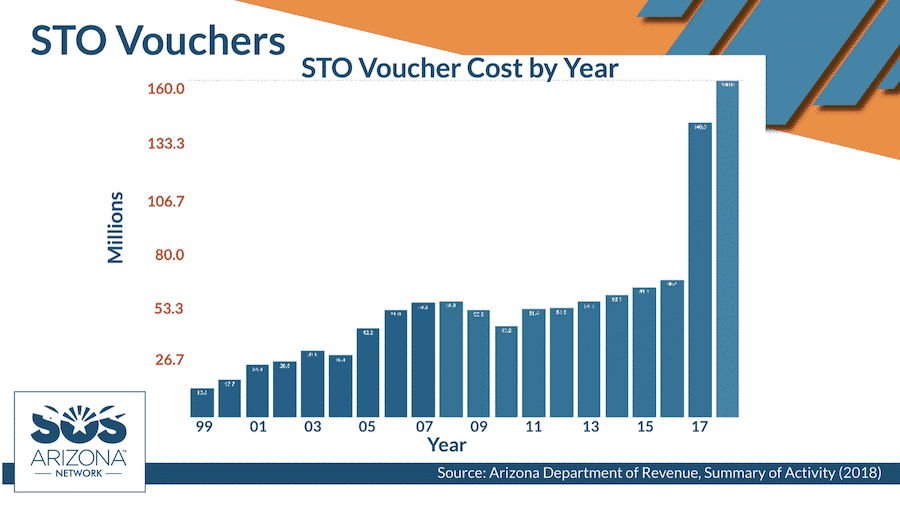 “It’s not a charitable purpose to contribute to your own child’s education,” said Bolick. “I support comprehensive school choice in Arizona, but we don’t have it. And it’s frustrating to see these programs manipulated to try to achieve goals they are not intended to achieve.”3