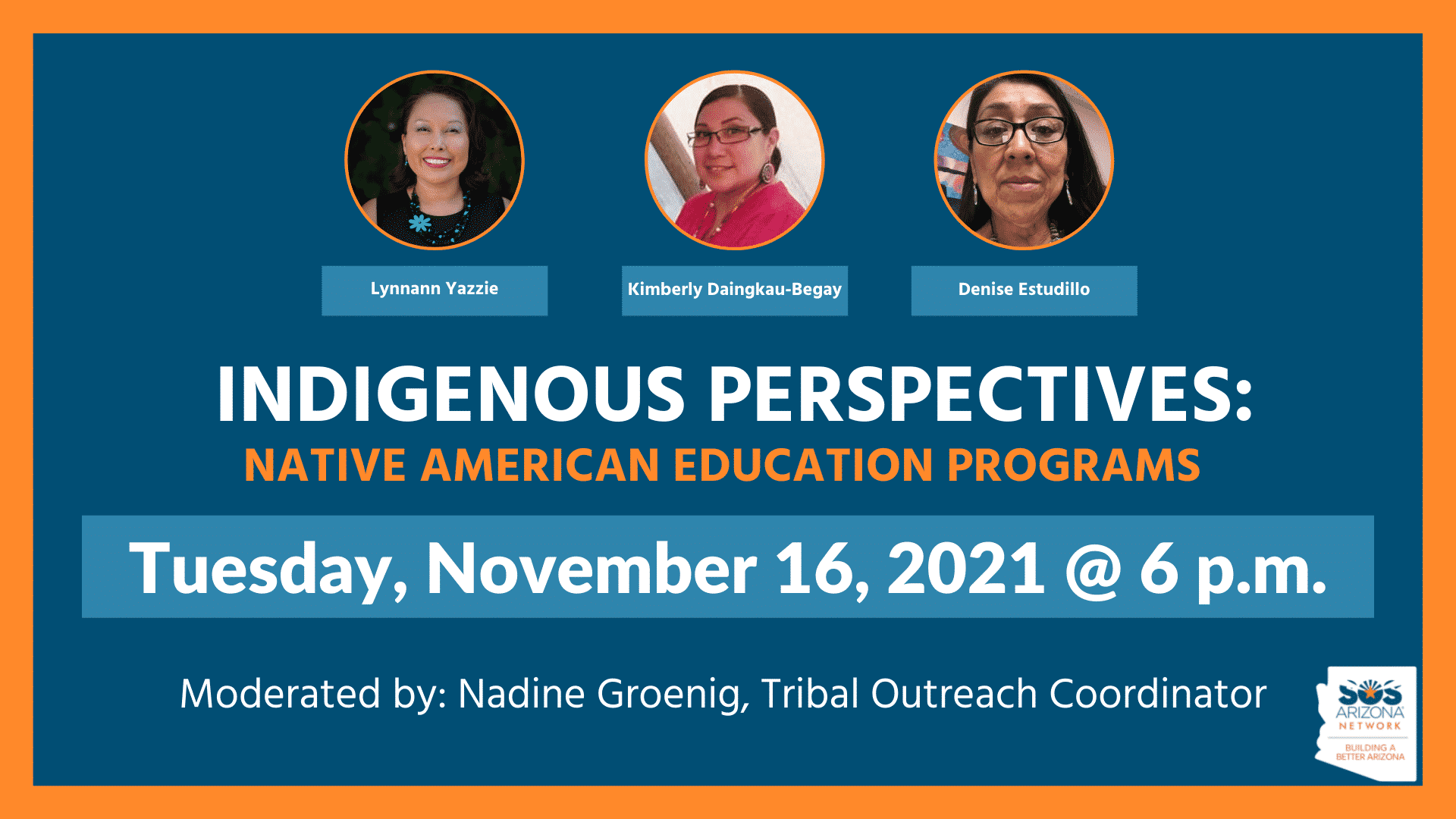 Join us to learn what Native American Education Programs can do for your Indigenous children!
Panelists:
– Lynnann Yazzie is a member of the Navajo Nation from Chinle, Arizona. She is the Native American Specialist with Phoenix Union High School District and oversees the Native American Education Program which provides support and services to over 1,300 Native students. In addition, Lynnann also serves as the Chairperson of the Arizona Office of Indian Education’s Indian Education Advisory Council and as the Communications Secretary for the Arizona Indian Education Association.
– Kimberly Daingkau-Begay is of the Kiowa, Caddo, and Pawnee Nations born and raised in southwest Oklahoma. She received her bachelor’s degree in Political Science with a minor in Pre-Law from Fort Lewis College in Durango, Colorado. Kimberly also studied at the University of Arizona in the American Indian Studies Graduate Program.
Kimberly has worked for the Bureau of Indian Affairs, the Kiowa Tribe of Oklahoma, and the United Keetoowah Band of Cherokee Indians. She currently works as the District Coordinator/Advisor of the Native American Education Program for Amphitheater Public Schools in Tucson. Kimberly also serves on the Arizona Office of Indian Education’s Indian Education Advisory Council and is the President of the Arizona Indian Education Association. She is also active in her local Native organizations, including the Native Education Alliance of Tucson.
– Denise Estudillo is of the Laguna Pueblo and Chippewa/Assiniboine tribes. Raised in the Southwest near her Pueblo, she strongly identifies with her Laguna tribal heritage. She spent her summers on the reservation in Montana visiting relatives from her paternal grandmother’s family and has recently re-connected with key relatives in Montana and North Dakota. Denise’s grandparents relocated from the Pueblo of Laguna in the early 1900’s to Winslow, AZ to work for the Atchison, Topeka and Santa Fe Railroads as did many other Lagunas. They established their own “Laguna Colony” living in renovated railroad boxcars and continued to practice their tribal customs and raise their families in their “home” away from the Pueblo. Denise earned a bachelor’s degree in Music Education from Eastern New Mexico University and master’s degrees in Education Leadership and Counseling from Northern Arizona University. She taught for 31 years on the Navajo Reservation near Gallup, NM and Winslow. Denise now serves as the Federal Programs Director for Winslow Unified School District.

Join us on FB Live at Save Our Schools Arizona Network or catch the event afterward on our YouTube channel.