Universal public education that isn’t dependent on one’s gender, race, social status, wealth, or religious belief is a fairly modern invention. The Aztecs had some of the first compulsory public schools attended by all children, although they differed from modern public schools in that enrollment began at the age of 15, and they maintained separate systems for higher-status children and lower-status children. This universal education system was wiped out by Spanish colonization of the empire, and publicly-funded compulsory education for all children wouldn’t really appear again until the early 1800’s in Prussia.

Since then the value of publicly-funded universal education systems open to all students has spread across the world, greatly increasing access to education by marginalized populations. Literacy is increasing in every corner of the globe as access to education improves, which has led to greater social mobility and economic growth.

Public investment in schools has been shown to have economic returns of around 6.8 to 10.6 percent in a randomized study of school construction, making public education one of the strongest investments people can make towards future economic growth.

Despite the clear benefits of our evolving and improving public schools, not everyone values social equity, mobility, and universal secular education. As a result, there are some highly effective groups working to dismantle public education in Arizona and across the country.

Modern public school privatizers like to frame education as a commodity rather than a public good. A metaphor they often use is that students should come with a “backpack full of cash” that public and private schools compete for, where the profit motive is expected to drive innovation and reward effective schools with more resources.

The most obvious flaw in this metaphor is that public education isn’t a consumer product, it is a public good. Public education and public schools are a part of a community’s physical and intellectual infrastructure.

When public funds are diverted from public schools and into private ones, students aren’t taking backpacks full of cash with them, they’re taking essential elements of the public infrastructure with them: textbooks, desks, teachers, counselors, bricks, busses, and all of the other pieces that have to come together to build and maintain an effective institution of education.

Public schools are an integral element of the fabric of American life, and are cornerstones of their communities. Even with our robust cultural support for public education, we also legally and culturally recognize the rights of parents to make decisions regarding their children’s education.

In Pierce v. Society of Sisters (1925) the U.S. Supreme Court struck down an Oregon law that required children to attend public schools and it upheld the rights of parents to determine how their children were educated. But it also made it clear that states have a right to regulate all schools, whether they’re public, private, or conducted in the home.

No question is raised concerning the power of the State reasonably to regulate all schools, to inspect, supervise and examine them, their teachers and pupils; to require that all children of proper age attend some school, that teachers shall be of good moral character and patriotic disposition, that certain studies plainly essential to good citizenship must be taught, and that nothing be taught which is manifestly inimical to the public welfare. 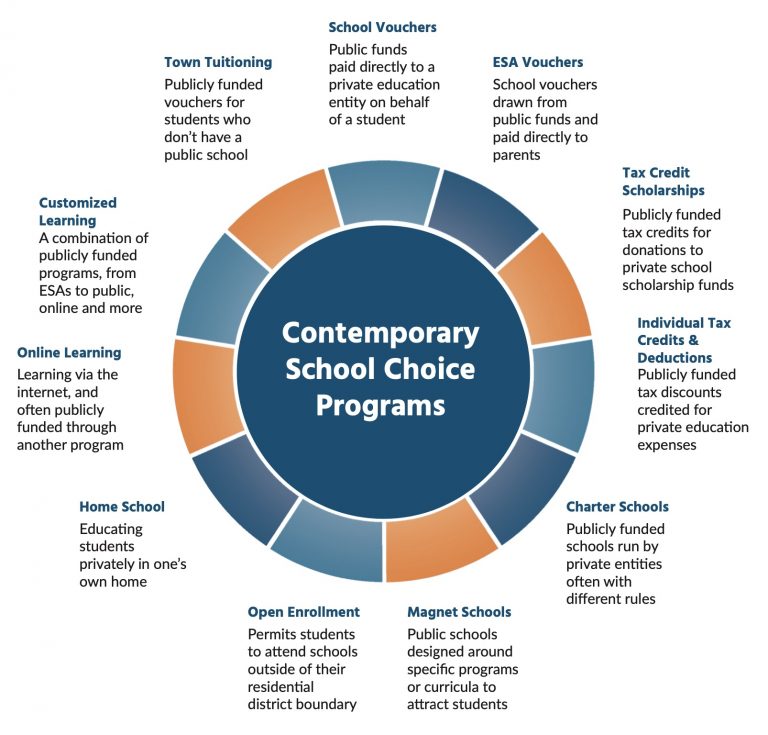 A movement to Americanize children by opening schools with Protestant values

A rise in the establishment and use of private schools for white families to avoid having their children attend integrated schools following court orders. These institutions became known as “segregation academies”

To counter the anti-integration movement, magnet schools were created to encourage multiculturalism and educational diversity

Following a number of federal education reforms, private groups and individuals began driving the development of charter schools which operate in a quasi-public, quasi-private space and compete with traditional public schools

As a result of these various privatization movements, we have a vast array of school choice programs available to students. These are often publicly funded and benefit private organizations with varying degrees of oversight. Many of the programs are similar but use different names for marketing or mechanisms to circumvent legal prohibitions on school privatization.

Lemon v. Kurtzman (1971) created the “Lemon Test” to help determine the constitutionality of a state providing aid to private, religious institutions. The U.S. Supreme Court found that any state action “must have a secular legislative purpose”

Committee for Public Education v. Nyquist (1973) the Supreme Court ruled that private religious schools should not receive public funding when that funding overly intertwines the state and religious organizations.

Aguilar v. Felton (1985) the Supreme Court struck down a New York program that sent public educators to private religious schools to aid students on the basis that it overly intertwined the state and religious organizations.

Witters v. Washington Department of Services for the Blind (1986) the Supreme Court upheld an individual student’s interest to have taxpayer funds support their enrollment in a private, religious school since they determined there would likely be no significant portion of the state aid flowing to a religious education. This case threw the doors for public funding of private, religious education wide open again, making room for a number of programs to follow in the decades since.

Until the 1980s, Arizona had quality schools and well-compensated teachers. But over the past 30 years, the focused work of well funded privatization proponents has starved our public education system and perpetuated a dangerous myth about “failing” public schools. Now, Arizona ranks last among the states in teacher retention, 49th in teacher pay, and 46th in per-pupil spending.

Spread the narrative that public schools are “failing” or “government” schools that promote “one size fits all” curriculum. Enforce a school grading system that doesn’t account for factors of poverty and trauma

Cut funding to the public school system by shrinking state revenue, shifting the burden to local property owners and parents. This disproportionately affects schools in impoverished neighborhoods with low property values and little disposable income. Slash entire programs like full-day kindergarten. Underfund to the point that schools must cut the positions like librarians, counselors, music teachers, and aides that help public school students prosper. As funding has decreased, test scores have decreased as well.

Declare that public schools do not work and claim there must be other options that are entitled to public funding (the myth of “school choice”). Glittery options for private schools are touted as a better education (even though they do not have to play by the same rules). In 2019, more than $200 million was diverted from public to private schools. 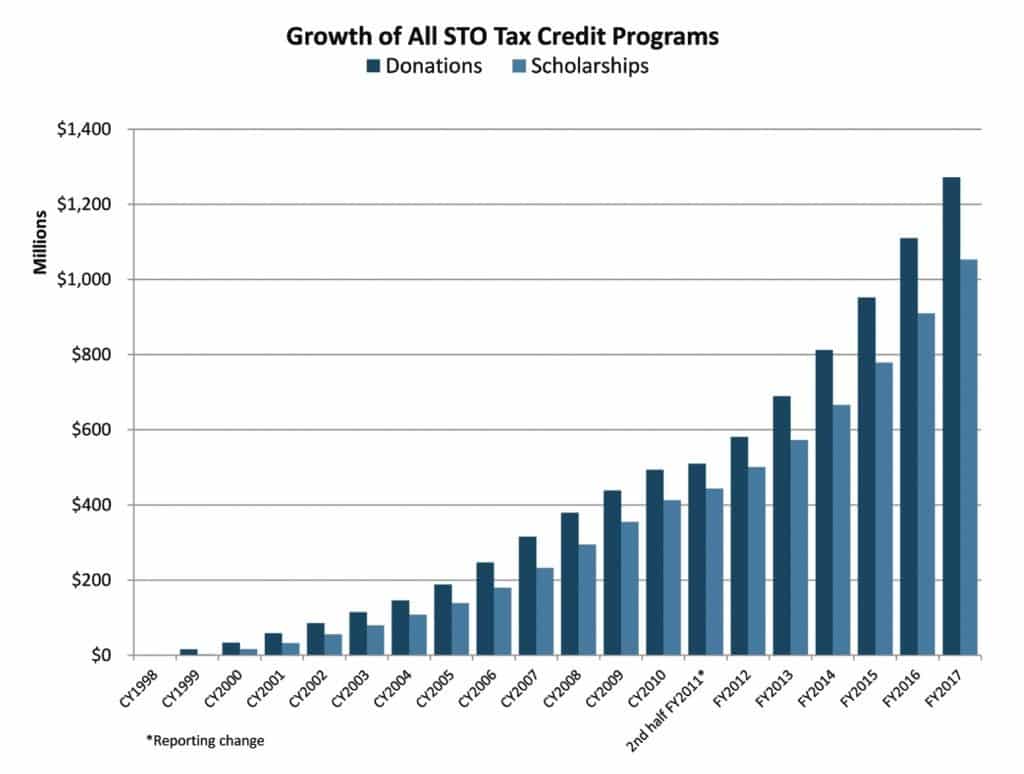 In 1997, then-Governor Fife Symington signed into law a private tax credit law that would set the stage as Arizona’s first form of vouchers. At the time, the Joint Legislative Budget Committee (JLBC) estimated that the cost would be $4.5M per year. In 2019, the cost now tops $160 million per year, and 93% of these vouchers are used for religious schools.

The STO program has grown by almost 4000% in 20 years. Arizona legislators have strategically and repeatedly expanded it, while several have personally profited from the organizations themselves. 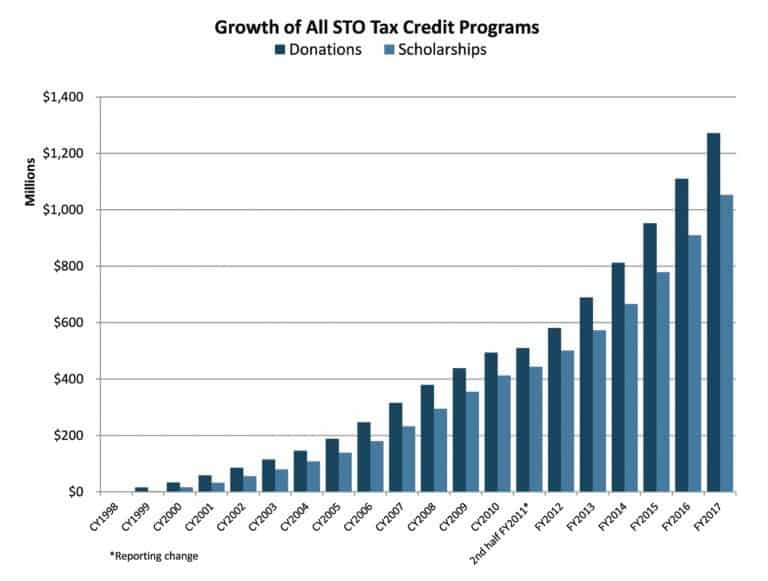 “It’s not a charitable purpose to contribute to your own child’s education,” said Bolick. “I support comprehensive school choice in Arizona, but we don’t have it. And it’s frustrating to see these programs manipulated to try to achieve goals they are not intended to achieve.”

Vouchers By Another Name: ESAs 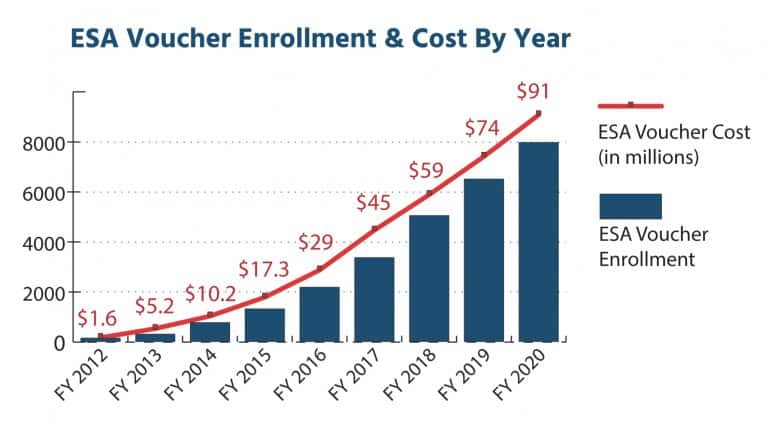