Many Arizonans first learned about Betsy DeVos and private school vouchers (or “ESAs”) in 2017, but what most don’t know is that DeVos and other privatizers have been pushing these and other vouchers in Arizona for over a decade. Read on to find out how vouchers were first introduced, and how DeVos first struck out in Arizona years ago. 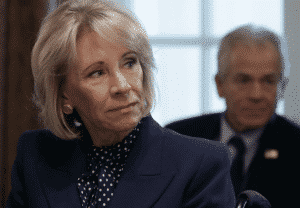 In 2006, after vowing in 2005 to veto any and all voucher deals, Governor Janet Napolitano agreed to accept three “school choice” programs as part of a budget compromise:

In return, the Governor received $100M for teacher pay and $160M for full-day kindergarten. These, however, were only temporary gains and have since been cut, while the diversion of public funds to private schools has skyrocketed.

So who has been pushing private school vouchers, and why?

These 2006 voucher bills received their greatest support from Clint Bolick, then the president of the Alliance for School Choice (ACS). ACS was founded in Arizona on May 17, 2004, the 50th anniversary of the landmark U.S. Supreme Court decision outlawing segregated schools,  Brown v. Board of Education. ACS later launched its C4 arm, the American Federation for Children (AFC), which was chaired and bankrolled by current Secretary of Public Education Betsy DeVos.

Bolick left ACS in 2007 to direct the Goldwater Institute, which has continued to push expansion of vouchers in Arizona and nationally. In 2016, Governor Doug Ducey appointed Bolick to the Arizona Supreme Court. Bolick’s former boss and now US Secretary of Education, Betsy DeVos has repeatedly stated that her work with these organizations is to find “ways that will continue to advance God’s Kingdom.”1 She has since referred to the K-12 school system as a “monopoly” and a “dead end.”2

On March 25, 2009, the Arizona Supreme Court unanimously declared Arizona’s school voucher programs unconstitutional. The court based its decision on the ground that vouchers violate an explicit constitutional ban against diverting taxpayer dollars to private and religious schools. Justice Michael Ryan noted that, without changing the Constitution, vouchers could not be implemented in Arizona because “these programs transfer state funds directly from the state treasury to private schools.”

Did the special interests promoting education privatization accept this defeat? Of course not. Watch for the next installment, “Defying the Constitution: Resurrecting Vouchers” which will drop next week.