A little history about resurrecting vouchers. In 2009, the Arizona Supreme Court unanimously declared Arizona’s school voucher programs unconstitutional, stating that vouchers violate a constitutional ban against diverting taxpayer dollars to private and religious schools. This defeat proved only a temporary setback for privatizers. Resurrecting vouchers was all part of the Privatization Plan.

The decision simultaneously handed the privatizers a roadmap to circumvent the Constitution through another route. While the court ruled that vouchers violated the Aid Clause of the AZ Constitution by transferring state funds directly to private schools, the decision noted that vouchers would be constitutional **if** public funds were simply to go to individuals (who then could choose to spend those funds on private or religious schools).

In its decision, the Court painted a clear description of what would become Empowerment Scholarship Accounts (ESA vouchers), the nation’s first private school voucher program. This mechanism would load tax dollars onto a debit card that would be mailed to parents seeking a private education for their child instead of to the private schools themselves.

Using this cue, in 2011 AZ lawmakers passed a limited $2.5 million ESA voucher program that cracked open the door to a new form of voucher via a sympathetic population—students with special needs, whose families had understandably been asking for better services from public schools whose slashed budgets made it increasingly harder to meet the needs of the highest-need students. The AZ Supreme Court issued its final decision in 2013 (Niehaus v Huppenthal) affirming the constitutionality of this workaround.

Over the next 5 years, the legislature incrementally expanded eligibility to several new categories of students, including those attending public schools that received a D or F rating, children in military families or foster care, children on Native American reservations, and incoming kindergartners. This strategy of incremental expansion has proved highly effective for the privatizers. Lawmakers who support privatizing public education have largely evaded public scrutiny by systematically passing “small” programs for sympathetic populations. 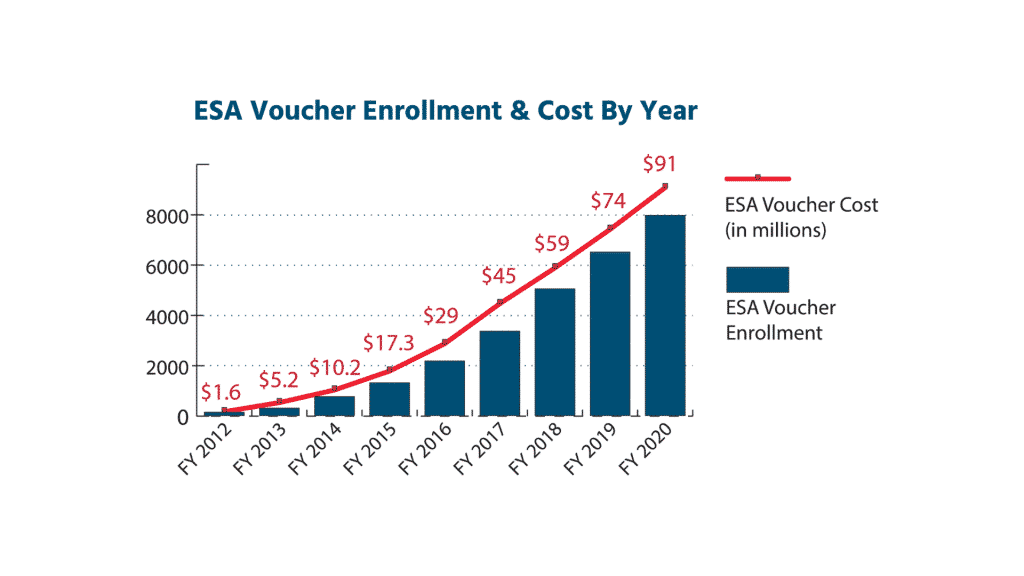 Meanwhile, the original “small” $2.5M voucher program has grown to over $80M per year, and continues to grow exponentially every year.

But out-of-state special interests weren’t satisfied with incremental expansion. In 2016, the American Federation for Children spent a quarter of a million dollars on local elections in Arizona, buying itself the legislature it needed to pass the nation’s first universal voucher program. Universal vouchers mean a voucher for every child, which was and remains the ultimate goal of privatizers. In 2017, this legislature did indeed pass universal voucher expansion in the form of SB1431.

Within hours of the bill being signed, Betsy DeVos tweeted congratulations to Governor Doug Ducey, and the Goldwater Institute celebrated via an email to its constituents with a promise to lift the negotiated enrollment cap—the compromise that enabled the bill to pass.1

Knowing universal vouchers were being forced through in the midst of a starving public school system and an unprecedented education crisis, frustrated parents and teachers filed a citizens’ referendum to put SB1431 on the ballot. This formalized into Save Our Schools Arizona, and thousands of SOSAZ volunteers worked across the state to collect 110,000 signatures, successfully defended against several lawsuits at the AZ Supreme Court (with Justice Clint Bolick on the bench), and ultimately ran a statewide campaign to defeat universal vouchers by a 2 to 1 margin in November 2018.

Around the US, vouchers have been put to voters over 20 times, and each time they have failed. According to Politico, “when voters in states across the country have been asked if they want to send public money to private schools through vouchers, they’ve pretty much always said no.” Arizona proved to be no exception.